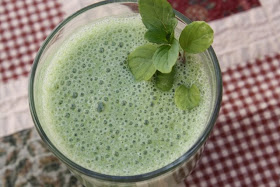 Look at that pretty green color in this smoothie. No it's not lime and it's not food coloring........ It's Spinach!!!! I know what your thinking gross but hear me out on this one. I too was a bit skeptical the first time I made this smoothie.

When I was in Napa I was talking to Aggie from Aggie's Kitchen and she told me all about these green smoothies also know as Green Monster Smoothie. Aggie said that these smoothies taste just like a banana smoothie just green, and her kids love them. Well my kids love bananas too so I couldn't wait to get back home and try out this recipe.

I knew the exact day that I wanted to make these. Saint Patricks Day!!! The perfect disguise. I told my kids that the green was food coloring to celebrate St Patty's Days!!! They fell for it hook, line and sinker. 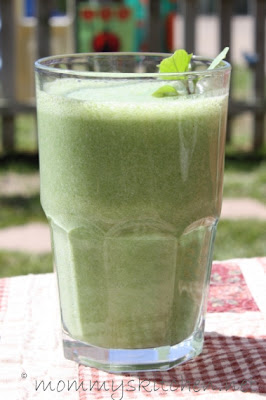 You see I was floored when Mackenzie was willing to give the smoothie a try and then she actually drank it. Mr. Picky Pants Carson said no way and wouldn't even touch it. I think Mackenzie freaked him out with the whole green slime thing LOL.

They do taste just like a banana smoothie but just green. The only thing I did differently was add a bit of honey because I could only find original almond milk. But I have still been adding the honey even with the vanilla almond milk.

That is the only change I made. I hope you give this recipe a try even if it is just out of curiosity. We love them and I have been making them a lot!!!! 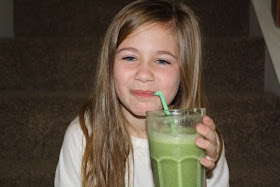 I am including a photo of my Mackenzie giving the Green Monsters aka Green Slime Smoothies a try. She said it tasted really good just like bananas. I still haven't told her the green is from Spinach, that will be our little secret. 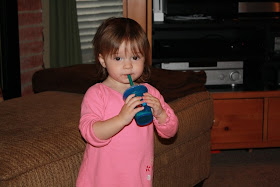 This is Gracie the little girl I babysit, also known as my smoothie buddy. Gracie loves the Green Monsters, but then there hasn't been a smoothie that Gracie has turned down. 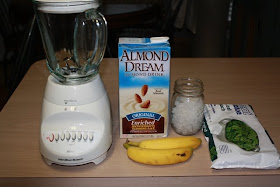 These are the ingredients you will need: Vanilla Almond Milk, 1 - 2 bananas, Spinach Fresh or Frozen (Fresh is best), ice and a bit of honey (optional). If you use frozen spinach and frozen bananas you can omit the ice because it will thicken up nicely with the frozen fruit and frozen spinach. 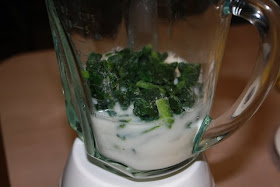 Add everything into the blender and mix until smooth.

Combine milk, bananas, spinach and ice in a blender; process on high setting until smooth.
Add honey if a sweeter taste is desired. Pour into glasses to serve.

While I’m not able to respond to every comment, I do try to answer any questions that haven’t been addressed in the post or recipe. Some comments are moderated, and may not appear immediately. Please note: I have only made the recipe as written, and cannot give advice or predict what will happen if you change something. Thank you all for taking the time to stop by and leave a comment.